Department of DefenceHomeMedia CentreNews and media releasesGlobal Hawk’s Australian touchdown – 20 years on, the impact is clear

Global Hawk’s Australian touchdown – 20 years on, the impact is clear 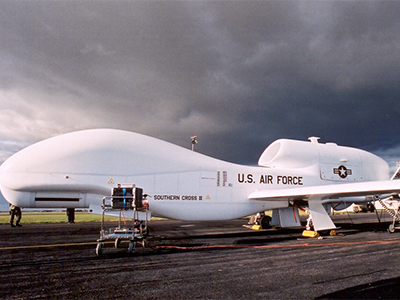 The touchdown of the United States’ Global Hawk uncrewed aerial vehicle (UAV) at RAAF Base Edinburgh on 23 April, 2001 was an exciting achievement in defence S&T.

It had taken 23 hours and 20 minutes for it to fly non-stop across the Pacific, creating aerospace history in the process.

The achievements of the team behind Global Hawk’s trip to Australia and associated trials down under are an example of the positive influence defence science can have on Defence capability in the short and long-term. Australian defence science ‘thought leadership’ at the time had a significant impact on the trajectory of US uncrewed high-altitude, long endurance air vehicle programs.

The extensive flight trials across Australia led to an extension of the Global Hawk capability from reconnaissance over pre-defined routes to being tasked dynamically for maritime surveillance.

Writing for Defence News in June 2001, Deanna Nott noted that when the Global Hawk touched down at RAAF Edinburgh “there was applause, sighs of relief and a general feeling of achievement that washed over Defence personnel responsible for the deployment.”

“The historic landing of the world’s most advanced high altitude, long endurance UAV saw the hard work and dedication of a four-way partnership between the RAAF, the Defence Science and Technology Organisation (DSTO, now DSTG), the United States Air Force and contractor Northrop Grumman come to fruition,” she wrote.

It took two years of intensive technical collaboration between Australia and the US to make the Global Hawk deployment a reality, with a DSTO team of 50 and two dozen industry contractors making a major contribution by developing the Australian Ground Element (AGE).

The AGE, a dedicated data exploitation capability in a shipping container, allowed DSTO and RAAF personnel to control Global Hawk sensors and provide real-time analysis of the data being obtained by the air vehicle’s sensors. USAF personnel in a nearby container monitored the Global Hawk during its pre-programmed, computerised routes.

Global Hawk was renamed Southern Cross II for its six-week Australian deployment, in a tribute to the achievements of the original Southern Cross. Charles Kingsford Smith, Charles Ulm, Harry Lyon and James Warner flew the Southern Cross, a Fokker F.VIIb/3m trimotor monoplane, on the first-ever trans-Pacific flight to Australia from mainland United States in 1928.

“UAVs, like Global Hawk, have the potential to fundamentally change the force structure of the ADF and the way we do business,” said RAAF AIRCDRE Graham Bentley at the time. Twenty years later UAVs are providing a valued and expanding capability within Defence. DSTG continues to support wider Defence in improving UAV integration and performance, in recent times focusing on UAV autonomy using artificial intelligence, and demonstrating progress on trials such as the Autonomous Warrior series.