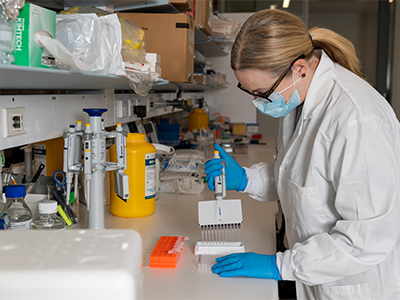 Defence is partnering with leading Australian universities to research new ways of measuring how the human body's molecules and microbes can contribute to the health and preparedness of Australian Defence Force personnel.

The Next Generation Technologies Fund (NGTF) has awarded contracts to the value of $7 million over three and a half years to the Queensland University of Technology (QUT) and the University of Newcastle (UON), to lead the cutting-edge research into mind-body health and performance.

“In the past, words like ‘guts’ and ‘intestinal fortitude’ were used as synonyms for courage and resolve, emerging research is indicating that those old sayings could be true,” Dr Kershaw said.

“The human gut microbiome is now recognised as being integral to human health and is likely to play a significant role in physical and cognitive performance.

“A healthy gut biome not only aids the immune system in times of stress but also affects the brain and our ability to perform.”

UON is working with QUT and Brisbane-based company Microba, to undertake the Cognitive Gut project, which is exploring the relationship between warfighter cognitive performance and the composition of the microbiome, with the potential for targeted modification in the future.

The research team will apply the latest genetic testing techniques to determine the gut bacterial composition of a large number of ADF personnel who will also be assessed for a targeted set of health and performance attributes.

The size of the military sample, the ability of the testing to distinguish between bacterial strains and the opportunity to identify previously unknown bacterial strains makes this study an exciting step forward for preparing ADF personnel to prevail in mission specific tasks and environments.

The opportunities don’t stop with the microbiome. The second study, the Performance Patch project, aims to deliver warfighter advantage by realising the potential for gathering molecular markers from bodily fluids in real time and combining them with physical and cognitive measures of human performance to better understand and influence warfighter performance.

The research team will push the boundaries of biological fluid sampling and analysis, drawing on techniques emerging from the field of medical research.

“By gathering both the biomarkers and performance attributes of a large sample of military personnel, this study will provide Defence with unprecedented insights into how it can use molecular markers to better predict and prepare for military mission performance,” Dr Kershaw said.

“These novel studies promise to provide positive benefits to our serving men and women, both mentally and physically.”

The Performance Patch and the Cognitive Gut projects emerged from an Emerging and Disruptive Technologies Assessment Symposium (EDTAS) in the Human Biotechnology domain run by Defence Science and Technology Group in October 2018.