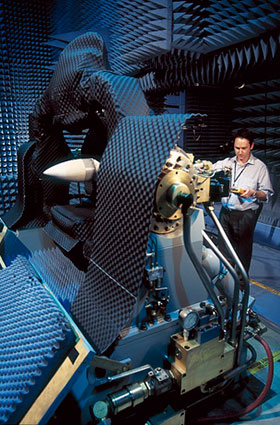 DST Group investigations into ESSM performance have involved developing and executing high fidelity digital models, hardware-in-the-loop testing and comparison to real-world firing trials in order to understand the capability of the weapon and provide advice on use and tactics.

Hardware-in-the-loop testing, conducted in conjunction with digital modelling investigations, is carried out in DST Group’s Missile Simulation Centre – a chamber lined with electromagnetic radiation absorbing material that enables the conditions of missile flight to be simulated. The trial set-up involves mounting actual missile guidance hardware in a gimbal frame that allows it to assume different attitudes, as it would when locking onto and approaching target. The missile is then put to the test against a moving aircraft whose presence is simulated by radar returns typical of those given off by a target aircraft.

This investigative approach, using digital and hardware simulation, is a much less costly and more controllable alternative to live firings, thus delivering significant savings to Defence. It provides the capability to examine weapon strengths and weaknesses, develop tactics for use and enable risk mitigation before live firing trials.

DST’s investigations have encompassed a range of operational scenarios. The information gained has been shared with members of the NATO Support Organisation ESSM consortium (of which Australia is a member), with comprehensive information on the weapon system having been provided to Australia as a result of this arrangement.