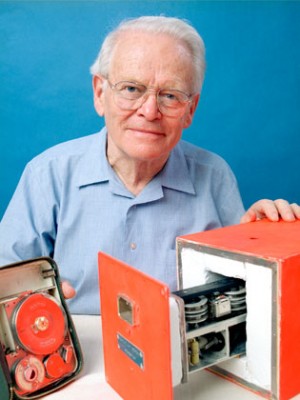 It was Dave Warren’s interest in the possibility of personally recording music that led to the invention of the world’s first flight recorder or ‘black box’.

Dave Warren was a research scientist at the Aeronautical Research Laboratory* (ARL) in Melbourne. In the mid-1950’s he was involved in the accident investigations related to the mysterious crash of the world’s first jet-powered commercial aircraft, the Comet. It occurred to Dave that it would be extremely useful if there had been a recording of what had happened in the aeroplane immediately prior to the crash. Dave then recalled the world’s first miniature recorder that he had recently seen at a trade fair. Suddenly he could visualise such a recorder placed in all aircraft, continually recording details and able to be recovered after a crash.

As with many new concepts, especially in Australia, Dave had trouble getting his idea off the ground. Eventually Dave prepared a report that was circulated internationally but produced little interest. Dave drew on his early work experience as a teacher, remembering ‘show and tell’ was more effective than just ‘tell’. He decided, in his own time, to build a demonstration recorder. Thus the first ‘black box’ was born. It could continually store up to four hours of speech, prior to any accident, as well as flight instrument readings. But, still no interest from any authorities.

It was 1958, during an informal visit to ARL by Sir Robert Hardingham, the former British Air Vice-Marshal, that the breakthrough occurred. Dave Warren was asked, during his lunchtime, to demonstrate his ‘unofficial project’. Straightaway Sir Robert saw the potential. Dave and his black box were almost immediately on a flight to England. The reception there was most encouraging. The Ministry of Aviation announced that the installation of the black box flight recorder for instrument readings might soon be made mandatory. The black box was also successfully demonstrated in Canada. In America the authorities declined an invitation from the Australian Embassy to demonstrate the device.

Back in Australia, plans were made for further development and production. However, a continuing lack of Australian support meant that, as the idea finally took off around the world, companies in other countries moved ahead with development, capturing the growing market.

It was only after the crash of a Fokker Friendship at Mackay (Queensland) in 1960 that the inquiry judge strongly recommended that black box flight recorders be installed in all airliners. Australia then became the first country in the world to make cockpit-voice recording compulsory.

David also served in many voluntary positions, including as chairman of the Combustion Institute (Aust & NZ Section) for 25 years (1958-83), and as a committee member of the Chemical Society, the Institute of Fuel, and the Australian Institute of Energy.

David's other interests have included lecturing and organising meetings for the Council of Adult Education, Probus Groups, the Forum Society, the Rationalist Society, and the Morris Minor Car Club of Victoria, of which he was the founding chairman and patron for 25 years (1977-2002).

While a student at the University of Sydney, David met Ruth Meadows, who became his wife and lifetime supporter. Together, they have raised a family and shared an interest in science and education, arranging many educational tours in conjunction with international conferences.

In recent years, David received a number of awards in recognition of his contributions to aeronautics and energy research, including:

In 2002, he was officially recognised in the Australia Day Honours list, being appointed an Officer in the General Division of the Order of Australia for his "service to the aviation industry, particularly through the early conceptual work and prototype development of the black box flight data recorder".