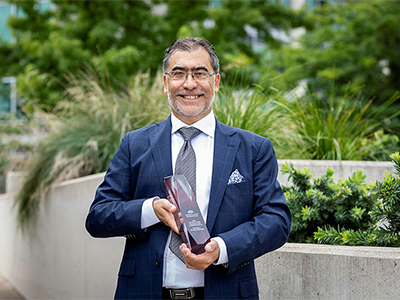 Defence operations analyst Dr Alexander Kalloniatis is the 2021 recipient of the Defence Minster’s Award for Achievement in Science and Technology.

Dr Kalloniatis has been conducting research and development in various ADF headquarters during the past 17 years that has led to insights and innovations that are improving ADF command and control structures, towards an agile “5th generation headquarters” environment.

Command and control (C2) is the capability by which information is passed and decision-making is delegated through an organisation to achieve missions. In the military context, that means the decision-making processes from the joint top-level headquarters to the warfighters on the front line. Dr Kalloniatis’ work at Defence Science and Technology Group (DSTG) has led to new understanding about how to improve our C2 agility, a critical enabler for modern defence operations. By identifying the ways in which our forces can be more agile, through organisational design, Dr Kalloniatis’ team is hoping to provide defence with a capability edge.

A key concept instilled by mentors early in Dr Kalloniatis’ defence science career was the importance, alongside building deep scientific foundations, of taking the time to walk in the ADF client’s domain, and then to build deep interrelationships between the two as one develops novel ideas and starts to translate those ideas into the domain. For this reason, Dr Kalloniatis has been a familiar sight on headquarters floors over the years.

‘Understanding our client’s domain is critical,’ he says. ‘And learning to speak in the language of our military counterparts to explain our science and technology (S&T) concepts and innovations in their language, and refreshing those explanations as they develop, and learning from mistakes, is fundamental to success.’

Team effort from the start

Dr Kalloniatis completed a PhD in theoretical physics from the University of Adelaide in 1992, and spent years working at various institutions and facilities around the world, modelling high energy sub-atomic particles. But after joining DSTG in 2005 he became single-minded in his analysis and innovation within the military command and control (C2) realm – modelling the behaviour of humans under extreme pressures. Dr Kalloniatis’ body of work includes a full range of empirical studies (in various ADF headquarters), theoretical studies (mathematical modelling) and conceptual contributions to the body of C2 knowledge. While continuing to publish in international conferences and journals, he has managed to contribute ideas that are now being implemented in the ADF.

‘I have worked very hard as a defence scientist,’ he says. ‘But from the day I walked in here a lot of people, leaders past and present, have put faith in me and have given me the opportunity to develop and build a profile in this area. I feel that my Minister’s Award also reflects on those colleagues and the patience they have put into developing DSTG’s operations analysis capability.’

A three-year Chief Defence Scientist Fellowship several years ago gave Dr Kalloniatis the time to develop a unified mathematical model of the interactions taking place in command and control structures. This was bolstered by work undertaken by DSTG’s Modelling Complex Warfighting Strategic Research Investment, and the outcomes are now contributing to the Defence Agile Command and Control STaR Shot. The Agile C2 STaRshot seeks to enhance the ADF’s ability to adapt to greater operational volatility in future contested and congested environments, and Dr Kalloniatis hopes to continue to walk the floors of ADF headquarters as he helps Defence to usher in these important changes.